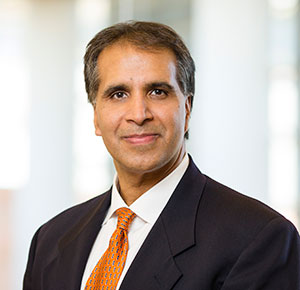 UC Davis Law is pleased to announce that Vikram Amar will join the faculty next year. Amar returns to King Hall as professor of law after serving as dean at the College of Law at Illinois since 2015. Before that he was the Senior Associate Dean for Academic Affairs at UC Davis Law from 2008 to 2015. Amar has also taught law at Berkeley School of Law, Hastings College of Law and UCLA School of Law.

“Professor Amar is an incredible scholar and teacher,” UC Davis Law Dean Kevin R. Johnson said. “He is a leader in legal education and looked to as a trusted source in the national legal landscape. His appointment will further advance the excellence of our faculty. We cannot wait to welcome Professor Amar back to King Hall.”

Amar is one of the most eminent and frequently cited authorities in constitutional law, federal courts, and civil procedure. He has produced several books and more than 60 articles in leading law reviews. He is a co-author (along with Akhil Reed Amar and Steven Calabresi) of the six-volume Treatise on Constitutional Law (West Publishing Co., 6th ed. 2021) pioneered by Ron Rotunda and John Nowak, as well as the hardbound and soft-cover one-volume hornbooks that derive from it. He is also a co-author (along with Jonathan Varat) of Constitutional Law: Cases and Materials (Foundation Press, 15th ed. 2017), a co-author on multiple volumes of the Wright & Miller Federal Practice and Procedure Treatise (West Publishing Co. 2006), and a co-author (along with John Oakley) of a one-volume treatise on American Civil Procedure (Kluwer, 2008). He writes a biweekly column on constitutional matters for Justia.com, for several years wrote a monthly column on legal education for abovethelaw.com, is a frequent commentator on local and national radio and TV, and has penned dozens of op-ed pieces for major newspapers and magazines.

A strong proponent of public and professional engagement, Amar is an elected member of the American Law Institute and has served as a consultant for, among others, the National Association of Attorneys General, the United States Department of Justice, the California Attorney General’s Office, the ACLU of Southern California, and the Center for Civic Education. For one year he chaired the Civil Procedure Section of the Association of American Law Schools.

Amar earned his bachelor’s degree from UC Berkeley and his juris doctor from Yale Law School, where he was an articles editor for the Yale Law Journal. He then clerked for Judge William A. Norris of the United States Court of Appeals for the Ninth Circuit and for Justice Harry A. Blackmun of the United States Supreme Court before joining Gibson, Dunn & Crutcher, where he handled a variety of complex civil and white-collar criminal matters. It appears that Professor Amar was the first person of South Asian heritage to clerk at the U.S. Supreme Court, and was the first American-born person of Indian descent to serve as a dean of a major American law school. Follow Dean Amar’s bi-weekly column on Justia.com and read archived posts from his FindLaw.com column.