Professor Frank publishes opinion piece with CNN: "America's West is drying out. Here's what we can do about it." July 16, 2021.

It's imperative that the American West modify its water policies without delay and implement more efficient methods of conserving and managing water, Professor Richard M. Frank writes in this piece for CNN. Read the article here.

Advocating for the Future

Attorneys in our varied roles need to step up and address the climate crisis for the sake of every person and for the public good. All lawyers must be sustainability lawyers now. This article explains why; it also offers an illustrative set of suggestions on how to get started and what to do. A PDF of the full article can be found here.

The article identifies what Frank considers to be some of the most misguided environmental policy initiatives pursued by the Trump administration over the past four years. It goes on to recommend corrective policies, regulatory initiatives and litigation strategies by which the incoming Biden administration can most expeditiously reverse the Trump environmental initiatives; restore USEPA’s role as guardian of America’s environmental values and public health; and rebuild EPA’s damaged stature, staff morale and effectiveness.  A PDF of the article may be accessed here.

CELPC Director and UC Davis School of Law Professor of Environmental Practice Richard "Rick" Frank publishes an opinion piece with the San Francisco Chronicle regarding Gov. Gavin Newsom’s initial, senior environmental appointments, which suggest that he is wisely following in Brown’s footsteps. See the full article online at the San Francisco Chronicle here. Additionally, a PDF of the article may be accessed here.

CELPC Director and UC Davis School of Law Professor of Environmental Practice Richard "Rick" Frank publishes an opinion piece with the Daily Journal on a U.S. Supreme Court case that will be argued on April 18th, 2018. See the article online at the Daily journal site here. A PDF of the article may be accessed here.

Last December, President Donald Trump removed national monument protections from more than 2 million acres of public lands – the largest rollback of protected public lands in American history. In 2018, it is widely expected that he and his appointees will continue this unprecedented attack. See CELPC Director and Professor of Environmental Practice Rick Frank's Sacramento Bee article here:  What California needs besides lawsuits to protect national monuments from Trump.

Forty years ago, California enacted the California Coastal Act to enhance public access, protect natural resources, and balance coastal development in the public interest. Today, growing challenges such as surging seas and rising population are testing that framework. This report draws from ideas discussed at a convening on coastal governance that explored the lessons of the past in order to chart a course for the next 40 years. The article may be accessed here:  The Past, Present, and Future of California's Coastal Act: Overcoming Division to Comprehensively Manage the Coast

Recently, three California local governments filed lawsuits against 37 major energy companies, seeking damages for the companies’ alleged contributions to global greenhouse gas emissions that have, in turn, caused sea level rise, more intense coastal storms, and flooding that are threatening the municipalities’ coastlines. The article may be accessed here:  Sea Level Suits are the Next Frontier in Climate Change Legislation

The California Supreme Court recently issued an important environmental and constitutional law decision that is simultaneously unique and part of a lengthy pattern: Friends of the Eel River v. North Coast Railroad Authority, 2017 DJDAR 7206 (July 28), is the latest of nearly a dozen Supreme Court cases in the last few years interpreting California’s most prominent and cross-cutting environmental law — the California Environmental Quality Act. But the ruling is unique in that it’s the first time in CEQA’s 47-year history that the justices have had the opportunity to consider the extent to which CEQA is preempted by federal law. The article may be accessed here:  Next Stop, Even More CEQA Litigation

On February 22nd, Professor Richard Frank testified before the California Senate Committee on Environmental Quality in Sacramento, California. The hearing, "The Federal Clean Air Act: California’s Waivers: How California's Strict Air Quality Standards Have Created Economic Growth and Improved Public Health" sought to understand the impact California's regulation of tailpipe emission on the public health and economy of the state. Professor Frank opened the proceeding with a history of air quality legislation and California's waivers under §209 (b) of the Federal Clean Air Act.

California imposed the first tailpipe emission standards in 1966, a year before the first federal legislation (the Air Quality Act), and pursued aggressive air pollutant regulation, including the passage of the Mulford-Carrell Act in 1967, which created the Air Resources Board; and the promulgation of the nation's first oxides of nitrogen emissions standards for motor vehicles in 1972.

Congress, when enacting the Clean Air Act, acknowledged California's pioneering role in regulating air quality and, despite otherwise explicit preemption of motor vehicle emissions regulation by the states, created a broad carve-out for California to continue regulating emissions. Put another way, Congress recognized California's role, and consciously allowed the state to engage in what Supreme Court Justice Louis Brandeis called, "[O]ne of the happy incidences of our federal system that a single courageous State may, if its citizens choose, serve as a laboratory and try novel social and economic experiments...."

"In sum, the House bill would simply reallocate a portion of California's finite water resources from one important use - preserving the environment - to another: agriculture. The Senate bill, by contrast, would expand the pie of available water supplies through federal support of a wide array of worthwhile water storage and conservation initiatives." The article may be viewed here:  Drought relief bills reveal stark differences. 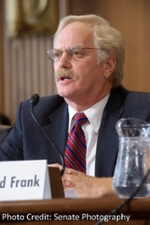 The subject of Professor Frank's testimony and the Committee's hearing was two competing bills designed to provide "federal drought relief" to California--H.R. 2898 (Valadao) and S. 1894 (Feinstein/Boxer).  The focus of the Valadao bill is to make more water available to agricultural users in California's Central Valley by amending various federal environmental laws and otherwise shifting finite water supplies from environmental purposes to agricultural purposes.  The Senate bill, by contrast, focuses on a more broad-based strategy of making more water supplies available through increased surface and groundwater storage facilities, conservation measures, storm water capture, and related options.  Professor Frank testified that the more comprehensive approach embodied in S. 1894 holds more promise than the narrower focus of H.R. 2898. The full text of his testimony may be viewed through the link below. His statement may be accessed here:  Statement of Richard M. Frank.

On September 28, Professor Frank published an essay in the Daily Journal on three cases pending before the California Supreme Court that call into question whether climate change concerns should be addressed as part of the environmental review process required by the California Environmental Quality Act (CEQA).

"CEQA is the most powerful environmental assessment law not just in the United States, but the world," Frank writes, in part because unlike the National Environmental Policy Act, it requires the state not only to identify adverse environmental impacts of a proposed project, but also to prevent or mitigate them. The three cases, Center for Biological Diversity v. California Fish and Wildlife, Ballona Wetlands Land Trust v. City of Los Angeles, and National Forest Foundation v. San Diego Association of Governments, "all reflect the broad uncertainty that currently exists among state and local officials, the development community, conservation organizations, and environmental attorneys regarding the CEQA/climate change nexus," writes Frank.  "The court's decisions in those cases should go a long way towards integrating CEQA and California's climate change law and will bring welcome clarification as to how projected climate change impacts are properly analyzed under CEQA."

The case involves the intersection of climate change law, transportation policy, and the California Environmental Quality Act (CEQA).  The specific legal question in the case--and the subject of the friend-of-the-court brief--is whether an environmental impact report prepared under CEQA in connection with a proposed regional transportation plan must analyze the plan's consistency with greenhouse gas emission reduction goals set forth in separate state law.  The brief argues that such consistency analysis is required under CEQA.  Professor Frank filed the brief on behalf of California's Planning and Conservation League and the Council of Infill Builders, a non-profit organization of real estate professionals committed to improving California through infill development practices.

In April, Professor Frank published an op-ed in the San Francisco Chronicle on the need to reform California's water laws. He included suggestions as to how the system could be modernized and improved, including recognizing water as a public resource, improving requirements for monitoring and reporting water diversions, creating fixed terms for water rights permits, making water transfers easier and quicker, giving the environment a seat at the water allocation table, and increasing water rights enforcement. The article may be viewed here:  California Water Law Must Change - Quickly.

Lessons from the West: Fracking and Water Resources

This short paper, “Lessons from the West: Fracking and Water Resources,” was prepared by Miles Hogan, CELPC Environmental Law Fellow.  The paper broadly examines how water law in western states applies to the overall use of water in fracking, and it raises issues with current and future regulation and litigation in this area.  The paper was compiled for a presentation given on November 9, 2012 at a workshop put on by Dividing the Waters and The National Judicial College.  This project demonstrates CELPC’s commitment to partnering with educators and policy institutes, and to providing a meaningful dialogue in key areas of environmental law and policy. The paper may be accessed here:  Lessons from the West: Fracking and Water Resources.

In June 2012 a group of environmental law professors, including Professor Rick Frank, submitted a brief in support of the California Air Resources Board's low carbon fuel standard. The brief may be accessed here:  Amici Curiae.

A Convening Report on SB 226 and the California Environmental Quality Act by Ethan N. Elkind, Rick Frank, and Sean Hecht. The report may be accessed here:  Defining Good Infill.

In November 2010, California voters enacted Proposition 26, an initiative measure that was largely overshadowed by other, more heavily-publicized measures on last fall's general election ballot. But Proposition 26, which mandates that most future state and local fee systems can only be enacted by a two thirds vote of the California Legislature or local voters, will have a profound effect on a variety of public health, safety and environmental protection measures. Proposition 26 is likely to have an especially pronounced effect on California environmental programs, which in recent years have relied heavily on "polluter pays"-based fee systems to fund them.

Set forth below are two opinion columns relating to Proposition 26: the first, written by King Hall Law Professor Christopher Elmendorf, suggests that the initiative measure may be unconstitutional under California's "single subject rule." The second, penned by California Environmental Law & Policy Center Director Richard Frank, discusses the background of Proposition 26, as well as its particular, anticipated effects on a variety of state and local environmental programs. Prof. Elmendorf's article may be viewed here:  “Voter Confusion and the Single-Subject Rule: Proposition 26 as a Test Case." Prof. Frank's article may be viewed here:  “Proposition 26: California’s Stealth Initiative.”