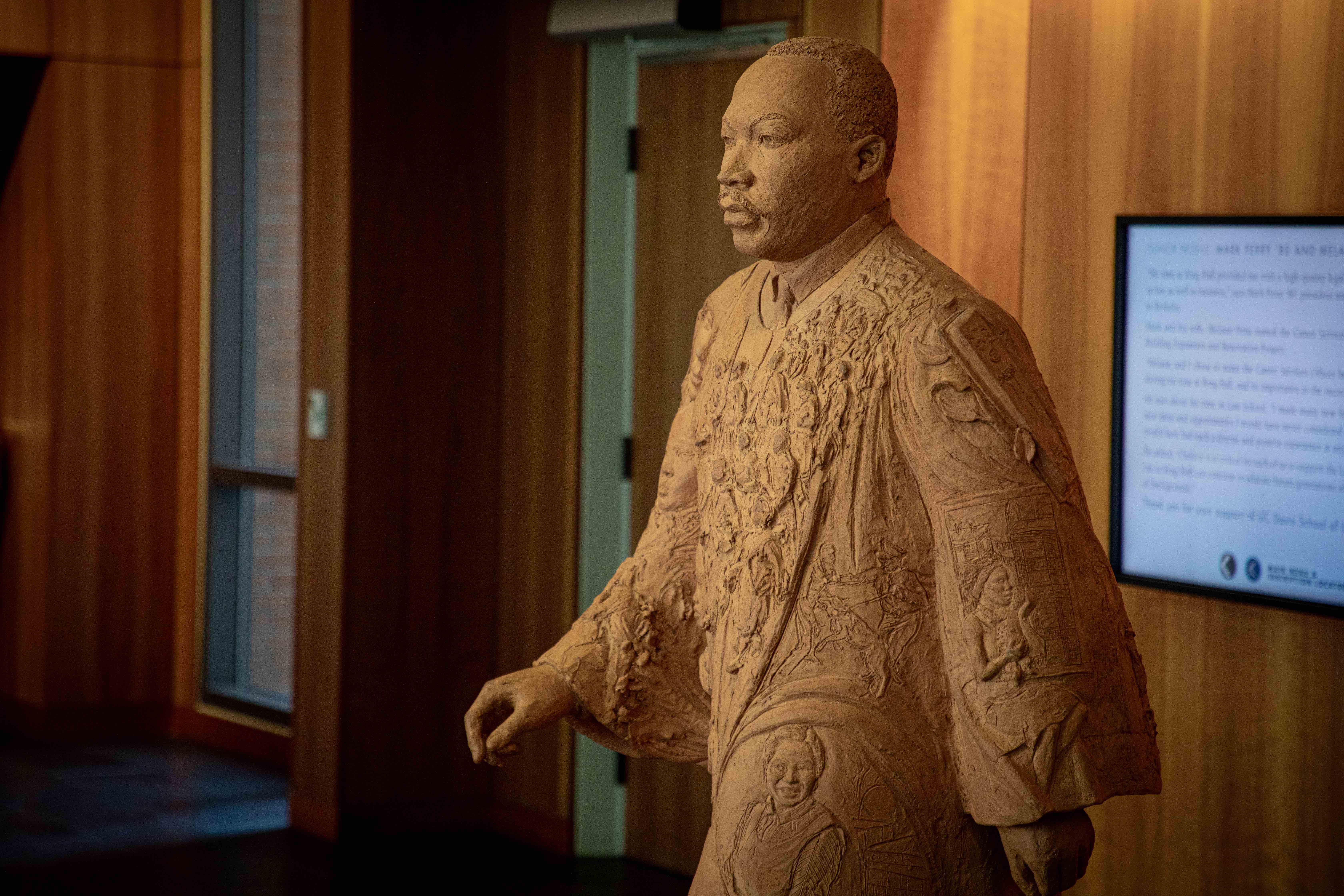 By Raquel E. Aldana, Professor of Law and Co-Director of the Aoki Center on Critical Race and Nation Studies

"We are caught in an inescapable network of mutuality, tied in a single garment of destiny. Whatever affects one directly, affects all indirectly." – Dr. Martin Luther King

I write these reflections on January 16, 2023, the day we commemorate Martin Luther King’s (MLK) legacy and imperative for racial justice. I am fortunate to teach at the UC Davis School of Law, named after MLK. King Hall, the name we use to call our school, draws exceptional students, including many who are committed to MLK’s racial justice project. In our Asylum and Refugee Law seminar this semester, we spent last week setting the stage to understand the human tragedy occurring at our U.S.-Mexico border and sadly the numerous parallels of similar stories across the globe. In anticipation of MLK day, I shared with my students a page the United Nations High Commissioner for Refugees (UNHCR) created back in 2021 in which a handful of transcendent refugees – meaning they themselves received harbor and propelled their lives to elevate others—reflected on how MLK inspires their lives. I was struck by the MLK quotes they chose. In addition to quote above, two others caught my attention: “Injustice anywhere is a threat to justice everywhere” and “America is essentially a dream, a dream yet unfulfilled.”

In 2016, the Huffpost wrote a piece titled Martin Luther King and Immigrant’s Rights. The piece discusses the paradox in how both those who promote restrictive borders and those who seek to open or erase them, claim MLK’s legacy as being on their side. The place of border justice – i.e., the treatment of freedom of movement as a fundamental right – as a racial justice project has not always been easy to name. This is, in part, because borders, not unlike prisons, have been used effectively to divide humanity between those who deserve justice and those who, due to their criminality or illegality, do not. The Huffpost piece, for example, recounts MLK’s efforts toward inclusivity when he wrote in a 1966 telegram to Cesar Chavez, the leader of the United Farm Workers (UFW), that our “separate struggles are really one.” Some would suggest that the Cesar Chavez and labor union’s own ambivalence over immigration, solidified a bounded inclusivity that prioritized the well-being of U.S. domestic workers in their search for racial justice. Except this explanation is too simplistic. For one, at the time, the UFW was comprised of a large force of undocumented workers. The problem, thus, was not the undocumented workers themselves but rather the system of laws, policies, and practices, that exploited the vulnerability of workers to create conflicts that directly compromised what should have been a joint project toward greater labor and workers right in this country. Overtime, labor unions would more fully understand the structural racism that permeated labor exploitation and to view borders as a tool for reinforcing such a system.

Today, MLK’s unfulfilled American dream for racial justice continue to weigh heavily on our shoulders. We are confronting an erasure of hard-fought civil rights gains in this country, sight unseen. Affirmative action and voting rights are threatened while racial disparities in income and other outcomes remain the most persistent features of U.S. society. It is understandable why the struggle for racial justice can turn us inward; except, in doing so, we can miss both nuance in analyzing the problem and its solutions or opportunities for global solidarity and action.

Take, for example, the dominant framing of asylum seekers form Mexico or Northern Triangle countries (Guatemala, El Salvador, on Honduras). Many, though certainly not all, are fleeing terrible violence waged against them by gangs or narco-traffickers. When I traveled with a group of King Hall students to Tijuana in March of 2022, I heard horrifying stories that haunt me still today. Yet I knew that even if the border had not been shut due to Title 42, few to none would qualify for asylum, their plight dismissed as privatized violence over which we neither had a moral or legal responsibility. But all we must do is dig a little bit deeper to understand this framing is just wrong. For over five decades, we have waged a similarly tragic, racialized, and failed war on drugs in Latin America that has wreaked havoc to many nation’s institutions and severely damaged their capacity to contain corruption and violence. As well, the transnational roots of gangs began with U.S. policies of mass deportations of gang members to the region without regard to the havoc – both violence and threats to democracy-- it would cause to those countries. Just yesterday, for example, hundreds of Salvadorans took to the streets to commemorate thirty-one years to peace that ended a war that left over 75,000 dead. But they all also protested President Bukele’s authoritarian rule which has, among other worries, led to tens of thousands of arrests and scores of human rights violations against those accused of gang affiliations.

Despite the above, in recent days, the tenor of the conversation between President Biden and Mexican President López Obrador, with focus on enforcement as a mean to control migration flows, remind me of the dangers of looking only inward when we think of racial justice. President Biden is under extreme domestic pressure to control the border, seemingly at any human cost. Over the years, border policies have contributed to thousands of migrant deaths at the U.S.-Mexico border, with 2022 being the worst year. Domestic calls for tough on immigration control at the border, often a bipartisan project, have deadly consequences. They are also shortsighted. They will not work because they fail to address the root causes of migration, which include externalities from or the exportation of domestic U.S. policies to Latin America whose casualties are the migrants at our Southern border whose suffering we fail to heed.

A Statement About Tyre Nichols